An early sculpture from my foundation year at Epsom. 1974. I had spent the previous summer working on a motorway, the A3. We used to construct road markers out of waste materials to warn of hazards, to the trucks and other users of the as yet unopened road. I think something of my attitude to positioning work in the public space, and then the gallery space originated here.

“Two Bombs Kiss”, Neem wood carving, 1990.
A prayer to avert nuclear war in the sub-c0ntitnet. It’s based on a story I’d read of Brancusi, his ambition to place a version of “The Kiss” between the trenches of the Germans and the allies in the first world war. 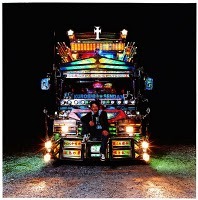 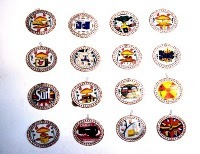 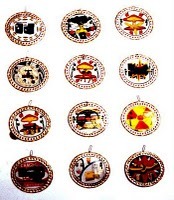 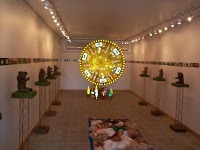 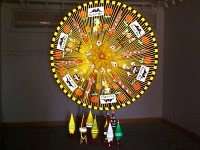 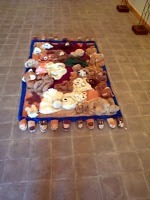 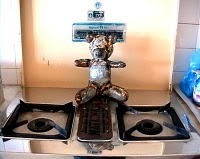 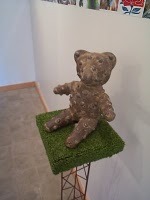 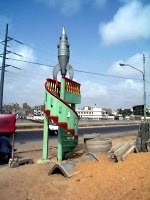 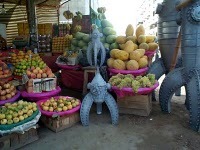 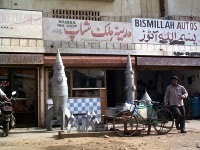 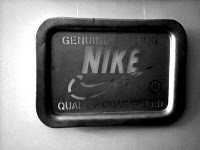 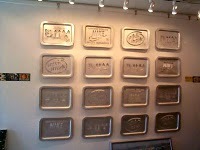 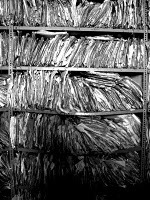 “Record Room”
Series, 2008-2009. Monochrome photographs. These will be shown in combination with “Fermi’s Pile”. The photographs will also be framed in grey, passivated zinc-plated steel. I will probably use a phosphate passivation on all the metal items. 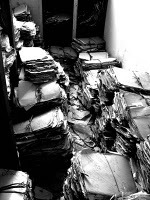 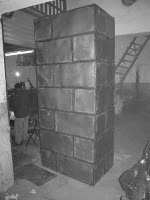 “12.2.42”
Part-progress to Fermi’s Pile, to be shown with the monochrome, “Record Room” images.
This will be constructed from 180 units, around 30 are present here. I’m now looking at a dark grey phosphate finish, same on the photographic frames. The work will probably be titled “12.2.42” the American date for when this first went critical and so beginning the atomic era.
Chicago Pile-1, a massive “atomic pile” of graphite bricks and uranium fuel, which went critical on December 2, 1942, built in a hard racquets court under Stagg Field, the football stadium at the University of Chicago. Due to a mistranslation, Soviet reports on Enrico Fermi claimed that his work was performed in a converted “pumpkin field” instead of a “squash court”. 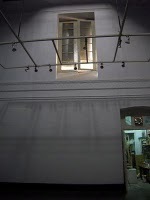 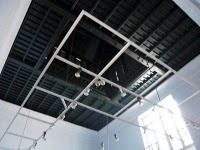 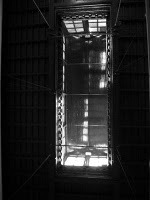 The NCA gallery space where the works will be shown, Jan. 2009. 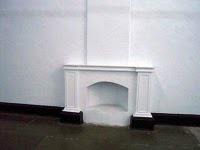 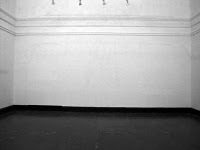 NCA Gallery, Jan. 2009. This is probably the space I will be using. There are three potential rooms.

I may also show a few of the botanical label works, these are in progress. They began in Linz, in the summer of 2008, at the Transart residency. I’m thinking of God telling man all the names (to settle the argument with the angels). I’m thinking of Eden and a taxonomy for Eden. I’m gradually working my way towards that, reseraching Quaranic and Biblical texts and refernces.